You are here: Home / Blog Post / School auction theme: Night at the Museum

Some props came from a prop house, such as this (Styrofoam) Easter Island stone head. Other props – like those in centerpieces – were pulled from the homes of parents.

I recently showed a few photos from this 2009 auction to a client who was going to be doing something similar.  The memory of that event still impresses me, so I thought I’d post a few of the photos on the blog.

When the Development Director told me that the school auction committee had settled on a “Night at the Museum” theme, I wasn’t overly enthusiastic. Many times I’ll have some ideas on how to support the theme. For this one, I was a tad stumped. 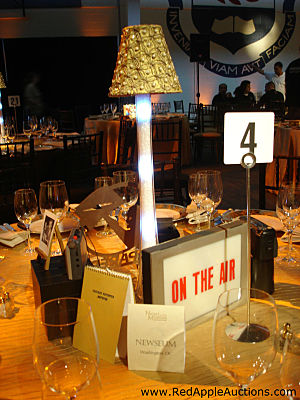 I loved the two Ben Stiller movies of the same name, but I wasn’t immediately able to scale the over-the-top special effects from the movie down to what would be realistic for the school gym.

I kept imagining Larry (the Ben Stiller character) playing fetch with the dinosaur skeleton and thinking, “Are those skeletons affordable to rent?”

With my doubts still intact, I was bowled over when I walked into the silent auction space. The auction team had brought the theme to life.

Here are some of the details that made a difference.

Lighting made a strong impression at this event. Because museums rely so heavily on lighting to showcase displays and exhibits, the addition of museum-type lighting in the gym helped seal-the-deal. It significantly contributed to making the space feel more like a museum.

To get to the gymnasium, guests walked in through the front of the school, walked down a long hallway filled with lockers, down some stairs, through another hallway, and into the gym.

To set the mood, “artifacts” were set up throughout the hallway. Old school uniforms and photographs from the early days of the school were stationed throughout the area. (Incidentally, this concept would also work well for a “Generation to Generation” auction theme.) 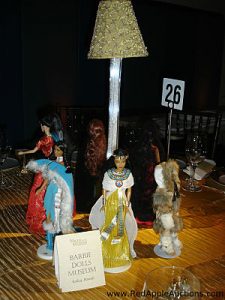 Each centerpiece was different and showcased a different museum from around the USA. Parents scrimmaged around in closets to find appropriate props to create the roughly 30 centerpieces needed for the auction.

The signage on the tables, on the easels, and on the walls all had that certain elegance you’d expect to see at a museum.

5. Displays for the Live Auction Items

Live auction displays in frames on the wall were classic museum-esque.

The school made displays for each live auction item. To create a more upscale look, they were put in over-sized frames and hung on a wall with a black drape. Lights showcased each one so it was easy to read the description.

Most of the items also had a small table or prop in front of the display to showcase it. 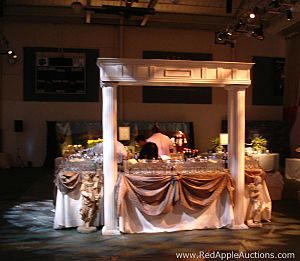 The bar was in the middle of the silent auction space and had a prop to appear “museum-like.” 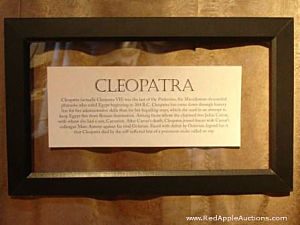 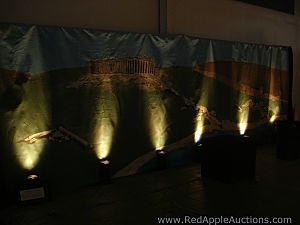 Lighting was used extensively to enhance the theme. In this shot, canned lights uplight a backdrop. 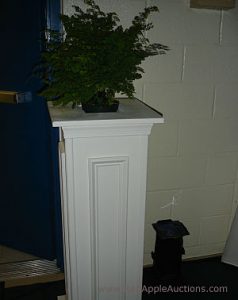 If you are the Decor Chair responsible for coming up with a school auction theme, here’s a resource designed just for you!

This DVD and workbook (see photo) simplifies common themes and trending ones.  Each concept is supported by many photos.

Take a peek at School Auction Themes, Centerpieces, and Decor.

A nice tie-in or separate product would be this collection of school auction catalogs.

[VIDEO] Embarrassing your auction donor with a (too) high opening bid?
Gambling, drinking and smoking at Tennessee fundraising auctions

Sherry, personally, I can’t even begin to tell you the immense amount of positive feedback that I received having YOU (and Darby) there with is this year! Some of the tidbits: You added EXCITEMENT and ENTERTAINMENT… You added EXPERTISE and FUN… You helped the evening FLOW, in a wonderful and positive direction… You were FUN,… Read The Rest “Anne Livaudais Knudsen, 5th year gala co-chair”

Aren’t KK and Michael a cute couple? They liked that I “moved the crowd along … kept the crowd engaged but wasn’t obtrusive or invasive. We were able to talk but still keep track of what was going on.”

You have NO idea of how many people came up to me (I know Julie as well) and said, ‘That auctioneer was incredible … she engaged the crowd, … she got the bidders to bid without being rude/pushing, … I loved observing her, I just watched her, … she did a great job.’ It was… Read The Rest “Staci Meruvia”

Geri said: “Great job of getting potential donors in the room to step up to the plate and not feel guilty or bad about it. They actually wanted to give more … and that’s not something I’ve seen in many other auctioneers.” The following year, she herself ‘stepped up’ and became one of the gala… Read The Rest “Geri”

Irene attended one of my New Hampshire auctions and assumed I must be a radio personality — until I started to chant that fast talk. “I’ve been to this event before with a couple of other auctioneers,” she said, “Your ability to get personal with people in a way that isn’t intimidating — men, women,… Read The Rest “Irene”

Most product & consulting remarks are found on their respective webpages, but I’ve listed two below so you’re assured my products are as spot-on as my auctioneering.   Not only was our 2013 auction a blast, but our Washington, D.C. public school raised $67,000 — that’s $25,000 more than last year! The evening went off… Read The Rest “Carolyn Kahn-Hall and Andrea Del Vecchio”

As a former Fox News Anchorwoman, I am often called on to perform at auctions. So, I know first-hand that auctioneering can be a difficult job. Sherry Truhlar is one of the best in the business. She is skillful at managing an audience and keeping them focused on the task at hand – which is… Read The Rest “Cynthia Steele Vance”